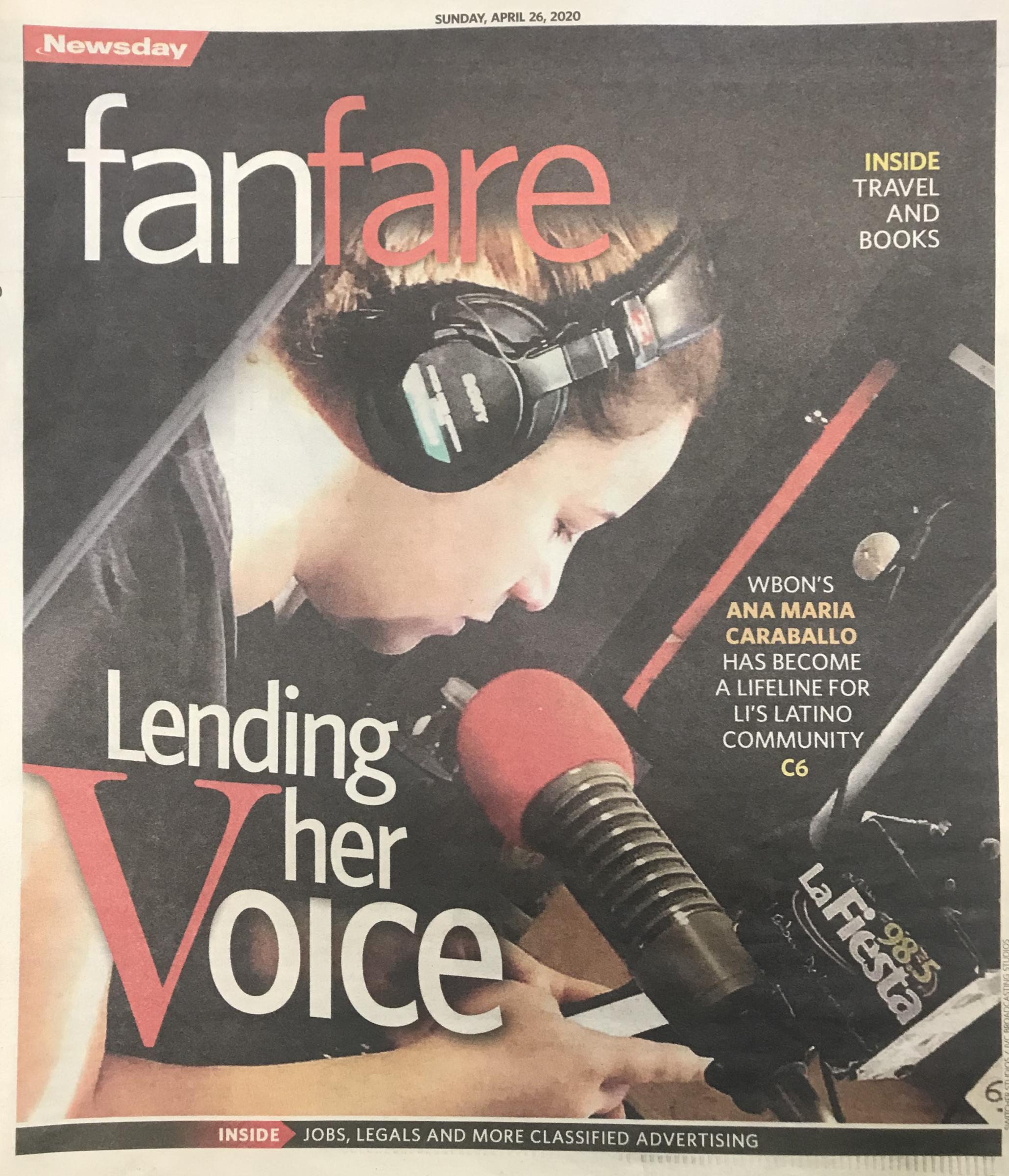 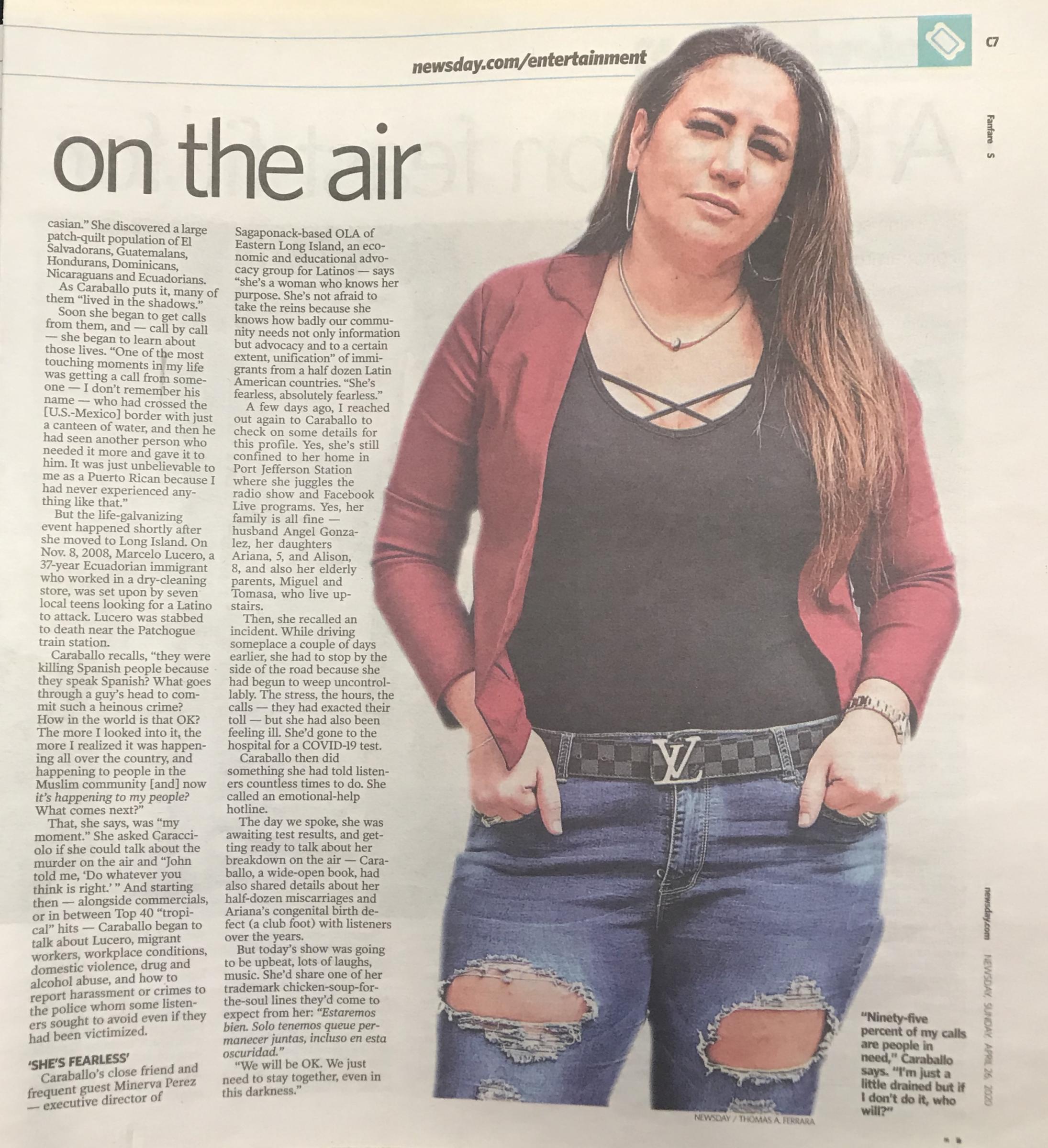 Late one recent Friday afternoon, the Oprah Winfrey of Suffolk County's sprawling Latino community is on a roll. In a sense, it's the same sort of house-confined "roll" we can all relate to.

By phone from her home in Port Jefferson Station, Ana Maria Caraballo is explaining why sleep has become optional (her 5-year-old "just likes to play with mommy in the middle of the night"). Or why she's had a recent spike in her own pandemic-induced anxiety (both of her children and husband have asthma, "and I'm just holding my breath [they] are safe.").

Also: why the universe still has a puckish sense of humor. The veteran host and program director for Ronkonkoma-based WBON/98.5 "La Fiesta" recalls a recent dash to some nearby store in pursuit of the holy grail of panic shopping — toilet paper — only to discover later that she'd returned home with a month's supply of paper towels instead.

She laughs because (well) who hasn't done that, and besides, it's just more material for her daily Spanish-language morning radio show and Facebook Live programs.

Mostly she's on a roll because she wouldn't know how to stop rolling if she tried. Besides radio and Facebook, the telephone now more than ever is Caraballo's natural extension and lifeline,   into which she pours a rush of ideas, information, advice and chicken soup for the soul.

Into her radio mic, listeners get much of the same.

Caraballo — just "Ana Maria" to them — has been fielding a hundred-or-so calls a day to the show since the pandemic began. They are desperate pleas for information, like Where can I get free testing? What happens if I have no health insurance? Where can I find a food pantry?

Or a variation of this:

"¿Qué le pasa a mi familia si me enfermo?" (What happens to my family if I get sick?) She gets that one a lot.

The questions spill over from her thrice-daily Facebook Live programs with the same urgency, same desperation.

"Ninety-five percent of my calls are people in need," she says. "I'm just a little drained but if I don't do it, who will?" 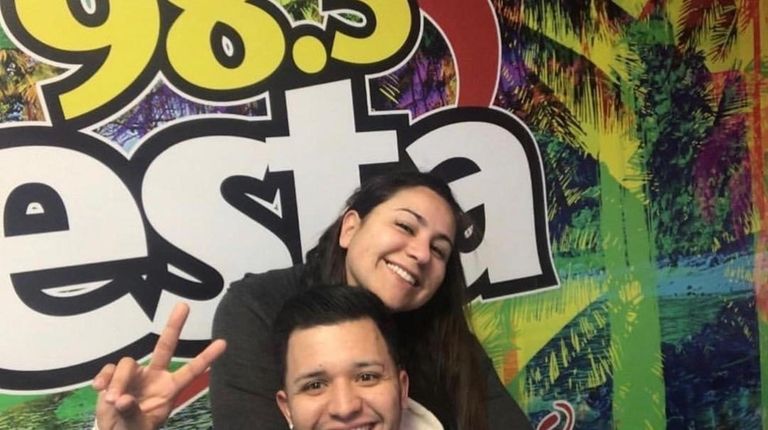 According to community leaders, no one else in fact has. They say Caraballo has emerged as the single most important source of information about the COVID-19 virus to Latinos on Long Island, especially those in Suffolk's hard hit communities that stretch from Brentwood to Riverhead.

As far as radio is concerned, she and her co-host Jose Alvarado, along with WBON's afternoon host John Gutierrez, are the only sources, which makes their role outsized and — community leaders say — critically important.

Leg. Sam Gonzalez, who represents the 9th Suffolk County District which encompasses Brentwood, Central Islip and some of the other most devastated communities on Long Island, says "she's just out there and on all the time. She'll bring nurses on the show, first responders, doctors, community representatives, activists and just regular people — veterans, old-timers, it just doesn't matter. She brings them on. I respect her greatly for what she does."

Olga El Sehamy, who's been coordinating Suffolk County Executive Steve Bellone's outreach efforts to the Latino community, says "she helps out tremendously. People here like their information straight up, and she is no holds barred. She says it like it is."

What it is like right now is perilous, say Gonzalez, El Sehamy and others. Pockets of Suffolk have some of the highest infectious rates in the country because large extended families are squeezed into small apartments. Workers are reluctant to leave risky or dangerous jobs to "shelter in place" because they live paycheck to paycheck.

Suffolk also has thousands of undocumented migrants who have no benefits, insurance and certainly no "safety nets," says Gonzalez. Some are also illiterate, which render some of the state and county outreach efforts — at least those in print — useless to them.

Caraballo and her team — Guttierez and producer Jairo Zuluaga — have filled the breach. She translates directives from police departments, health clinics and county leaders like Bellone and State Sen. Monica Martinez, which she then reads on the air. She's assumed the role of mother hen, insisting that listeners follow "best practices," like wearing masks. She's also assumed the role of mic'd avenger. If someone reports a store that's been price-gouging, she calls out the store. If a caller says workers in a factory line can't practice "social distancing," she demands that local officials investigate. 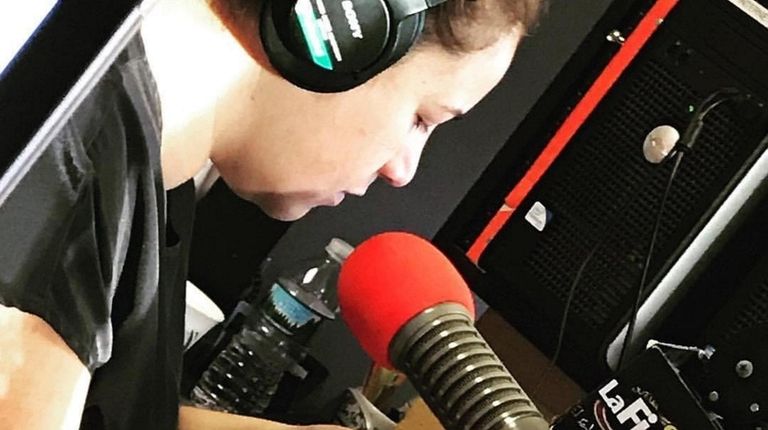 In the studio and on the air, Ana Maria Caraballo, morning host and program director of

Meanwhile, she's become a strident advocate for Suffolk's undocumented immigrants. Luis Brito, Martinez's liaison to the Latino community, says "they are abused by some employers and they think they don't have any rights either. [Caraballo] explains the immigration law to them, and that [employers] have to respect their human rights, and labor rights. She does that work every single day."

Because life brings surprises to each of us — at the moment, that all-encompassing and unwelcome one — Caraballo, 37, admits this is a role she never anticipated.

Born in Ponce, a city of 200,000 on Puerto Rico's south coast, she moved to New Jersey in 2001 to study broadcast communications at Kean University in Union, N.J. The plan was to get her degree, then move back home for a job. When offers didn't materialize, Caraballo returned to New York, where she landed promotion gigs at WKTU/103-5, then at Spanish Broadcasting System, operator of New York stations like WSKQ/97.9, with a specialty in "Spanish Tropical" formats.

Caraballo didn't sync well there — "I was one of nine on the morning show, helping producers, doing stunts, and the last one in the food chain" — and decided to make a change in 2008, to JVC, which owns a string of stations in Florida and on Long Island, including WBON.

"When we started [in 2008], someone recommended her [and] we fell in love with her," says JVC chief John Caracciolo. He handed the reins of the station to her a year later.

Caraballo launched the morning show around that time, and she "thought I was going to talk to myself, or maybe two listeners." Then, WBON began to run events on the North Fork and East End "where I thought the majority of people were Caucasian because I remember what [former WKTU disc jockey] Goumba Johnny had [done] at Westbury]" She discovered a large patchquilt population of El Salvadorans, Guatemalans, Hondurans, Dominicans, Nicaraguans and Ecuadorians.

As Caraballo puts it, many of them "lived in the shadows." 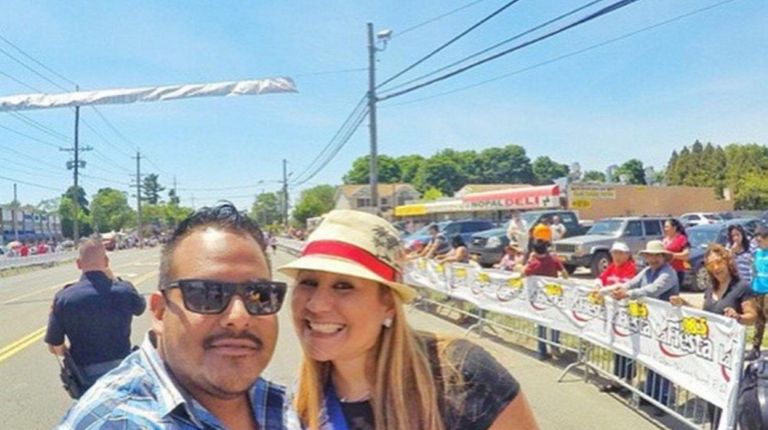 Soon she began to get calls from them, and — call by call — she began to learn about those lives. "One of the most touching moments in my life was getting a call from someone — I don't remember his name — who had crossed the [U.S./Mexican] border with just a canteen of water, and then he had seen another person who needed it more and gave it to him. It was just unbelievable to me as a Puerto Rican because I had never experienced anything like that."

But the life-galvanizing event happened shortly after she moved to Long Island. On Nov. 8, 2008, Marcelo Lucero, a 37-year Ecuadorean immigrant who worked in a dry-cleaning store, was set upon by seven local teens looking for a Latino to attack. Lucero was stabbed to death near the Patchogue train station.

Caraballo recalls, "they were killing Spanish people because they speak Spanish? What goes through a guy guy's head to commit such a heinous crime. How in the world is that OK? The more I looked into it, the more I realized it was happening all over the country, and happening to people in the Muslim community [and] now it's happening to my people? What comes next?"

That, she says, was "my moment." She asked Caracciolo if she could talk about the murder on the air and "John told me 'do whatever you think is right.'" And starting then — alongside commercials, or in between Top-40 "tropical" hits — Caraballo began to talk about Lucero, migrant workers, workplace conditions, domestic violence, drug and alcohol abuse, and how to report harassment or crimes to the police whom some listeners sought to avoid even if they had been victimized.

Caraballo's close friend and frequent guest Minerva Perez — executive director of Sagaponack-based OLA of Eastern Long Island, an economic and educational advocacy group for Latinos — says "she's a woman who knows her purpose. She's not afraid to take the reins because she knows how badly our community needs not only information but advocacy and to a certain extent, unification" of immigrants from a half dozen Latin American countries. "She's fearless, absolutely fearless."

A few days ago, I reached out again to Caraballo to check on some housecleaning details for this profile. Yes, she's still confined to her home in Port Jefferson Station where she juggles the radio show and Facebook Live programs. Yes, her family is all fine — husband Angel Gonzalez, her daughters, Ariana, 5, and Alison, 8, and also her elderly parents, Miguel and Tomasa, who live upstairs.

Then, she recalled an incident. While driving someplace a couple days earlier, she had to stop by the side of the road because she had begun to weep uncontrollably. The stress, the hours, the calls — they had exacted their toll — but she had also been feeling ill. She'd gone to the hospital for a COVID-19 test.

Caraballo then did something she had told listeners countless times to do. She called an emotional-help hotline.

The day we spoke, she was awaiting test results, and getting ready to talk about her breakdown on the air —   Caraballo, a wide-open book, had also shared details about her half-dozen miscarriages and Ariana's congenital birth defect (a club foot) with listeners over the years.

"We will be OK. We just need to stay together, even in this darkness."